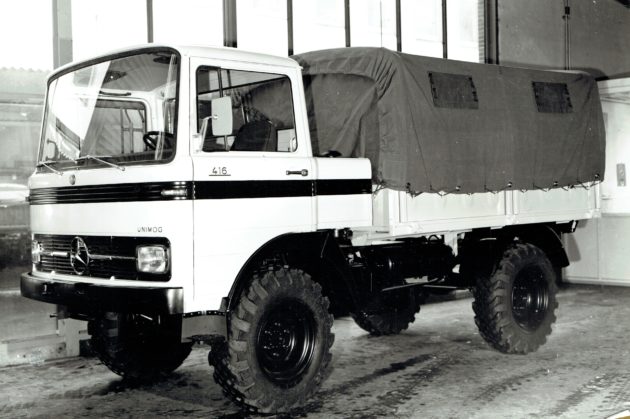 The test with a completely different Unimog look

On 23 December 1969 a very special Unimog was presented. At first sight it looked like a truck from Mercedes-Benz. The type designation 416 was only known from the Unimog. But this project idea never got beyond the test phase.

As early as 1968, in the preparation of a new Unimog generation, considerations had been made to avoid the unimaginably high costs for development and legalisation, as well as the high tool costs of new cabs, which were unimaginable for laymen. For this reason, those responsible for development wanted to make use of existing cabs from the Daimler-Benz truck range. And so, in the Gaggenau Unimog test, chassis of the Unimog 416 were fitted with the Wörth truck cab 314. The decisive factor in the selection of the 314 truck cab was originally the assessment that this cab would also make a three-seater version possible. Initial considerations were to include this cab as a „comfort cab“ in the existing Unimog series, as expectations of driving comfort had risen constantly at the time. A three-seater version, however, could not be implemented even in the development phase. But at least two comfortable individual seats – also as swinging seats – could be accommodated. Also hardly comprehensible to the layman were the many changes to the cab and chassis that became necessary to enable the vehicle to be presented to the public one day before Christmas Eve 1969, so that the reaction of the market could then be better assessed. In April 1970, it was then determined that investments of more than two million DM would be required for series production and that the additional costs for each Unimog 416 with truck cab would therefore amount to around 1000 DM. 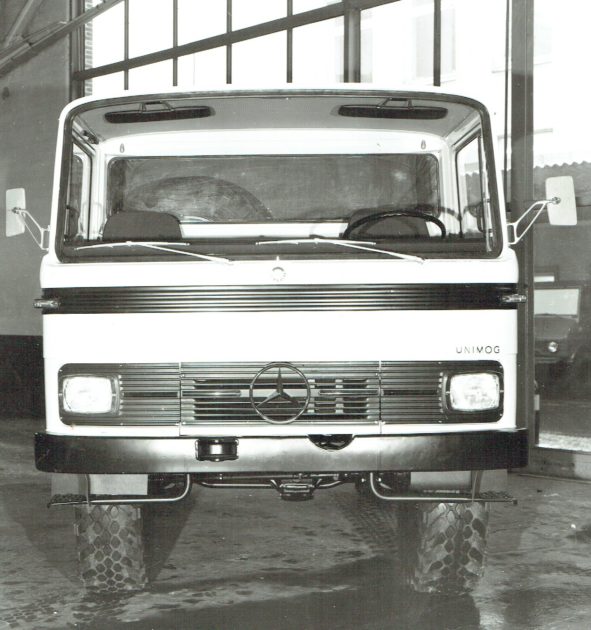 Only the UNIMOG logo indicates that this is a special vehicle

Hans Westemeyer from Bad Rotenfels, who was responsible for the cabs in the Unimog sector at the time, recalls: „We didn’t get beyond the test stage. It turned out that this front-wheel drive Unimog could only be driven on the road. For a few years, experiments were still being carried out – the vehicle did not reach series-production readiness! At the start of production of the Unimog in 2002 in Wörth, only two series were assembled after the product range had been streamlined: the 405 implement carrier and the 437 all-terrain vehicle. Due to the continuing demand for a smaller Unimog, the U 20 light implement carrier was offered from 2007 onwards. Due to the further increase in expenditure for the development, legalisation and production of an own cab, the decision was made in favour of the Accelo truck built in Brazil. The Unimog 20 was only in the production programme until 2014. 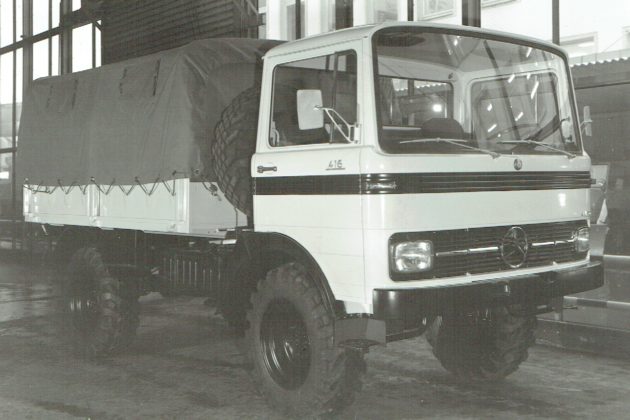 View of the passenger side

This website uses cookies to improve your experience while you navigate through the website. Out of these, the cookies that are categorized as necessary are stored on your browser as they are essential for the working of basic functionalities of the website. We also use third-party cookies that help us analyze and understand how you use this website. These cookies will be stored in your browser only with your consent. You also have the option to opt-out of these cookies. But opting out of some of these cookies may affect your browsing experience.
Notwendige immer aktiv

Any cookies that may not be particularly necessary for the website to function and is used specifically to collect user personal data via analytics, ads, other embedded contents are termed as non-necessary cookies. It is mandatory to procure user consent prior to running these cookies on your website.